Police officers in Missouri were 75 percent more likely to stop Black drivers than white drivers last year, according to a report released Monday by Chris Koster, the state’s attorney general.

The data revealed that although Blacks were more likely to be stopped and searched than whites, they were less likely to be found with contraband than their white counterparts. Nearly 27 percent of white drivers who were searched possessed something illegal. Just 21 percent of Black drivers had an illegal item on them.

The figures highlight a significant disparity in stops between Black and white drivers since the state started keeping records in 2000.

In a statement, Mr. Koster, who is expected to run for governor next year, said that the data was a “starting point” for discussion on racial disparities in police practices, according to the New York Times.

But he asserted that the findings did not necessarily prove  “that law enforcement officers are making vehicle stops based on the perceived race or ethnicity of the driver.” 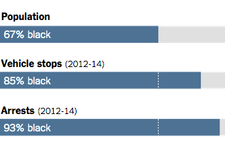 Activists have complained that Missouri officials have done little in response to the data, but figures have been used to lobby for changes in other states.

Law enforcement agencies in Michigan, North Carolina and Texas have all changed policies in response to data that showed disparate stops between Blacks and whites.

About a half-dozen states mandate collection of traffic stop data. Even fewer analyze it carefully for racial disparities.