The filmmaker and musician who shattered a Southern Taboo by climbing a flagpole outside the South Carolina State House to remove the Confederate flag is speaking out for the first time since the incident.

Newsome, who was arrested soon after taking down the Confederate flag, spoke with the Blue Nation Review in an exclusive interview.

Now is the time for true courage.

I realized that now is the time for true courage the morning after the Charleston Massacre shook me to the core of my being. I couldn’t sleep. I sat awake in the dead of night. All the ghosts of the past seemed to be rising.

Not long ago, I had watched the beginning of Selma, the reenactment of the 16th Street Baptist Church bombing and had shuddered at the horrors of history.

But this was neither a scene from a movie nor was it the past. A white man had just entered a black church and massacred people as they prayed. He had assassinated a civil rights leader. This was not a page in a textbook I was reading nor an inscription on a monument I was visiting.

Social media erupted in applause after a photo of Newsome taking down the flag went viral. Artist Rebecca Cohen captured the heroic moment and gave it an iconic, pop-cultural feel by depicting Newsome as a Black version of Wonder Woman. 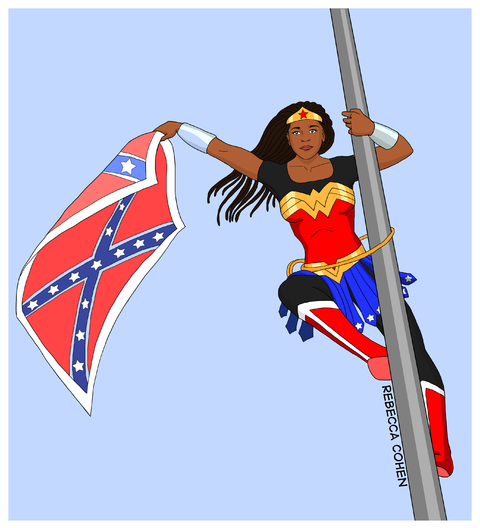 Newsome is a graduate of New York University. She was arrested and charged with “defacing a monument.”

Click here to read the rest of Newsome’s statement.